Hey all! This week is National Infertility Awareness Week (NIAW). Up until this year, I really didn’t know such a thing existed – but it has, for over 25 years. And why shouldn’t it? We have awareness events and programs for all sorts of things – cancer, MS, autism, hunger…Yet even I, someone experiencing infertility firsthand, have had a hard time finding awareness events or publicity for infertility. And unfortunately, I kind of understand that – after all, infertility struggles are seen as private – there’s a level of intimacy associated with fertility that has somehow become politically incorrect to discuss in public. I might pose the question – is there not the same level of intimacy implied when we talk about expectant mothers and newborns? The answer is yes, there is, but there’s a stigma associated with infertility that is deeply rooted in our pronatalist society. Our society sees bearing children as socially desirable and as a normal, expected  milestone in life. So then someone like me, who has not/currently is unable to conceive a child, is considered damaged goods, a deviant from the socially accepted role placed upon women (and their partners). An elephant accompanies me to every room, as others might wonder what’s wrong with me that I don’t have kids yet? According to social research, infertility makes people “less than” and diminishes their accomplishments in life. In fact, research shows the same levels of anxiety and depression in people experiencing infertility as those with cancer, HIV, and heart disease.

By definition, women and men experiencing infertility struggles are plagued with a “disease.” But don’t expect insurance companies to support a solution, because if anything, health insurance, at least in the US, just propagates the stigma of infertility, denying financial support for fertility treatments. Yet it’s not like IUI or IVF are experimental treatments – millions of babies have been born out of these medical advancements. Don’t worry, I won’t go on about the financial aspect of infertility – that’s for another blog post. But for the sake of this post, I’ll tell you that only 15 states in the US require insurance coverage for IVF. And no, Wisconsin is not one of them.

So not only are you considered socially “abnormal” and a bit ostracized as friends and peers have children and can share in these moments together without you, but you are also considered “diseased/damaged” by the medical community. And don’t think you’ll have help “healing” because unless you’re made of money, or live in one of those 15 states, you won’t have help from insurance. Okay, so that’s kind of a dramatic way of putting things and it seems ridiculous, but relatively speaking, it’s true.

When I first started this blog, I was afraid. What would people think? Would I be embarrassed by so vulnerably sharing our story? Would people think I’m crazy for baring it all for friends, family, and strangers to see? And now more than ever, my answer is, who cares? I have no reason to be ashamed. I’m one in eight people who struggle with infertility. That’s 7.5 million Americans. Since starting this blog I have been incredibly humbled by the sheer number of friends, family, and strangers who have come forward and shared their infertility struggles with me. And I’ve come to realize that I’m MORE than 1 in 8. We are MORE than 1 in 8. The more I share, the more others feel comfortable sharing with me, and the more we foster an environment of support, discussion, and change, rather than loneliness, silence, and stagnation.

I made a promise to myself that this week is the perfect time to take action and start breaking the stigma of infertility. I’ll detail my progress in future blogs but here’s the plan: 1) BLOG!!!,  2) Join a support group, 3) Advocate by writing to state government.

This blog is one of the most rewarding and empowering things I have ever done – and that is because of all of you – not only because you read this, but because you offer support, share your stories, and remind me that there is good in the world. I know this post was a lot about NIAW, but really it’s about empowerment. Whatever struggles you face in life, they don’t have to be related to infertility like mine – whatever has made you feel “less than” or like an outsider, don’t let it anymore. Pull up your bootstraps (that’s what they say right?) and advocate for yourself. Become empowered by the love and support from friends and family around you, by the grace of God above you, and by the heart and soul within you. I promise you’ll find the world is a much more beautiful place when you break out of whatever stigma has its hold on you. Don’t see yourself how others have defined you. Define yourself first…and then show others. 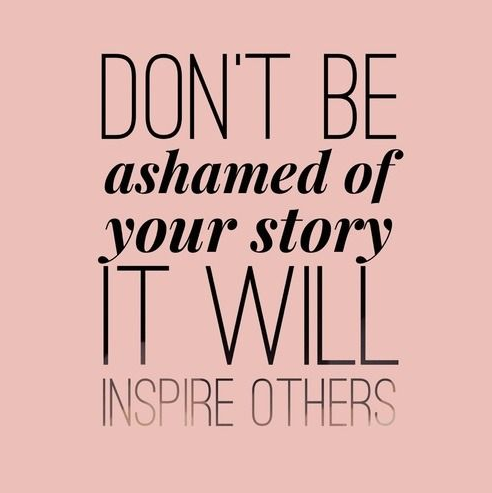 “Me” in Endometriosis Campaign